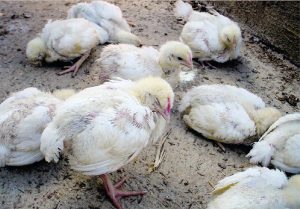 Symptoms and Lesions
The severity of symptoms and lesions as the main causes of weakness in chickens depends on the virulence of the infected virus, the type of bird (egg or meat ) and the immune status of the infected bird. Two separate clinical tables are monitored:
Acute clinical IBD
Subclinical IBD
1. Acute clinical IBD
The disease starts suddenly
Infected animals are stagnant, furry, feeble, and sometimes they are observed to be beaked in ventilation.
3 days after infection morbidity and mortality starts, 5-7 days peak and falls.
Mortality may be negligible or up to 90% of cases of virulent IBDV. Usually mortality is 10-20%.
In field conditions , mortality is higher in egg yolks than in broilers (meat hens).
Dead animals are usually dehydrated (forming kidney lesions).
Petechial hemorrhages are frequently observed in the legs and chest muscles.
Bleeding and erosion can be observed in the combination of course and stone.
Depending on the severity of the disease changes in the nasal lesions. The following table summarizes the changes in the size, weight and morphology of the scholarship.

Variant ibdv strains do not cause serious inflammatory reactions. However, severe bursal atrophy is a characteristic finding and mortality is usually less than 5%.
In addition to Bursa fabriticusa, multiple virulent ibdv strains cause serious lesions in lymphoid organs such as timus, Sepal tonsils and spleen.
2. Subclinical IBD
Subclinical ibdv chicks occur in the first 2 weeks after ovulation and have maternal antibodies that can prevent the disease but can’t prevent viral replication in Bursa during the infection period.
Bursa atrophy, immunosuppression and related sekunder infections (E.it is characterized by an increase in the likelihood of getting caught (such as coli).
Clinical IBD mortality is not monitored.
Infections of the eyelid in broilers, usually E.coli causes a continuous standard daily mortality increase and a reduction in the use of feed.
Weak reactions may occur due to immunosuppression.
Gumboro is also referred to as infectious bursal disease or is briefly referred to as IBD. Avian influenza (bird flu) is an infection caused by avian (bird) influenza (flu) viruses. Morbidity is very high, mortality varies between 5% and 60%.
What Is The Factor?
A stock is a type of virus that causes the disease factor. There are two different serotypes of this virus. The strains included in serotype 1 are pathogens for chickens. Serotype 2 is not pathogen for chickens.
Infection Formation
Usually young animals are more susceptible to infection. The disease is especially seen in 3 to 6 weeks of poultry. However, the range may range from 2 to 15 weeks. Active and contaminated equipment, feedings, and pads constitute the source of the disease. There is an incubation period of approximately 3-4 days after the effect is taken into the body. Deaths are usually 2. it starts from day one and follows an increasing trend. 7. from day one, death stops. This course is among the most important findings of the disease. Severity and mortality rate of the disease; the age of the animal varies, depending on the general immune status, the virus’s virulence.
One of the major causes of the disease is immunosuppression, which means that it causes the immune system to be suppressed. Because of the serious damage in Bursa fabrixus, the immune system is very weak. Especially at an early age, avian influenza may not be resistant enough to future infections.
Clinical Symptoms
Fever, watery diarrhea, growth in Bursa Fabricius, oedema and pecking their tails are among the symptoms of the disease. The back side of the animals is contaminated because of watery diarrhea. The body is mixed with feathers, mat and raised.
During the disease Bursa Fabricius first grows, then begins to bleed. After a while, Bursa takes a yellow structure fabrixus, then it takes a white appearance and atrophy. Subclinical gumoro disease, especially seen in 2 weeks chicks, is characterized by atrophied Bursa.
Necrosis Findings
The above mentioned symptoms are the most important symptoms. Other than this, bleeding in the legs and chest muscles, bleeding in the stomach, mucous contents in the intestines, pale liver can be seen.
Diagnosis
The disease is largely determined by clinical symptoms and necropsy findings. Serology should be done for definitive diagnosis.
Treatment and Prevention
Vaccines are used for active immunity. For this reason, live vaccines and inactivated vaccines may be preferred. In practice, mild strains, intermediate strains and vaccines against hot strains are used. In general, intermediate strains are preferred in vaccination.