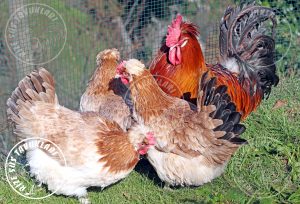 It is a rare breed of chicken from the Styrian region of Austria, which dates back to ancient history. Well-fed Sulmater chickens, which are well-fed between their forests and vineyards in the Styrian region, are famous for their rounded, muscular body and outstanding quality of meat. There are a few hobbies in Turkey. One of them is Rize ornamental chickens. Sulmtaler chickens are considered as good chickens in terms of egg yield and chicks ‘ maintenance. At the same time, the meat is very tasty. In some regions, it is also known as the hen of Kings. 13. It was indispensable for the Kings because the chicken meat, which was wanted to be seen in the tables by the Kings in the centuries, was quite delicious.
They served delicately the meat of the Sulmtaler chicken by the Kings of Austria and the French courts and the famous coast of Central Europe. Their rooster is small and has bright brown-yellowish colors. The tail feathers are fairly long and add a nice appearance. The lower part of the hens is seen in light brown tones. Chickens have feathers in their heads. Both the rooster and the chicken have this charming hair and posture. The Axe has only one comb in the form of ‘S’ chickens. Annual egg yield is very good. Egg capacity of 200 and above is observed.

About a hundred years ago, the breed came to the present with a concerted effort to standardize and use its strengths for agricultural production. The best example of these studies is the production and standardization studies in grape and vineyard areas, and the name of Sulmtaler. The name of the sulmater chickens is derived from the Sulm Valley, which is far from the people of Austria and lived by predatory hunting tribes in rural areas. By 1915, the awareness of the race, beauty and the characteristics of meat in this region has been admired by the people. During the Second World War, the race of the Sulmater chickens was about to disappear completely, and by a few hobbyists, he worked for his old reputation and not to lose his generation. Today, it is still under the protection of a generation. There is also a collection of Rize ornamental chickens brought by a few hobbyists in Turkey. It is on the list of American standards. Rooster 3 kg – 4 kg, chickens SE 3 kg-4 kg weight varies.
Colors
Rooster: like the red Oxford Old English game with black chest, with the exception of brown-red neck and saddle feathers, the rooster is allowed to have some brown spots on its chest. Tassel brown red.
(Red Oxford Old English game with black chest: cock: chest, shoulders, abdomen and tail black. The wing bar is steel blue; the sekonderler (closed) is reddish brown. Neck and saddle feathers are orange-red. The shoulders red-red.)
Chicken: except for brown-red neck feathers, where some matt black lines or spots are accepted, the body color is darker, Wheaten (wheat) is like the Old English game.
The Hill is light wheat.
(Wheaten) Oxford Old English game Chicken: Wheaten; body and wings (similar to wheat) pale cream color, neck feathers light red. Tails and primers are almost black.)
Both sexes
It’s beak skin or horn color. Eyes orange red. The bogus, the face and the rhinos are red. Ears are white. The legs and feet are white, the scales are pink, the toes are red.