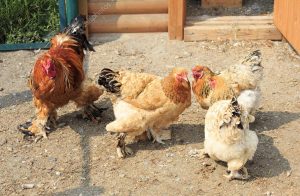 Cochin is the most human chicken and the largest chicken. 19. It was brought from China to the European continent at the end of a century. He was sent to America with his interest in Europe. The neck and leg parts of Cochin are very hairy.The chickens are cream-colored and medium-sized eggs.The weight of his cock is 5 kg. the chickens are 4 kg. it is around and is a gentle,less-paying race.At the same time, “Pekin bantam” varieties include dwarf called.
At first, the Cochin chickens were called Shanghai or Cochin-Chinas in Europe.
Cochin chickens managed to enter the American Poultry Association(American standards) through studies and developments made by the UK poultry clubs ( standard of Excellence in exhibiting poultry). According to this official colors are buff Cochin, Black Cochin, cinnamon Cochin, Groouse Cochin, lemon Cochin, Partridge Cochin, silver buff Cochin, Silver buff Cochin, Silver buff Artichoke Cochin, and white Cochin chickens. Although Cochin chickens also exist in bandages, they are not listed.
Cochinis are an incubator. Turkeys and ducks can take out their eggs. The number of eggs per year is 100-150. Cochin rooster 4.50 kg-6 kg chickens come between 4 kg-5 kg. Rize is not fed in ornamental chickens.